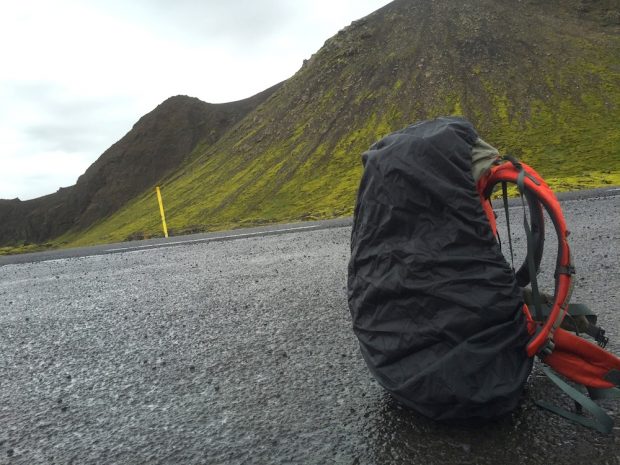 RUNNING ACROSS ICELAND: WHAT IT MEANS TO FAIL, PART 1

There was a white tuft peeking out between tall grass on a ledge overlooking the valley, maybe 50 feet from the trail where I was plodding another descent. At this point, somewhere around 44 miles into my south-to-north run across Iceland, I’d already gained an acute sheep-dar, turning towards the confused herds with the keenness of a canine pointer without even realizing what I was doing.

They noticed me noticing them and, as with all the previous woolen interactions, scampered hurriedly away, their little wooly haunches undulating vigorously. They never ran fully away, just far enough to cement secure distance for examination of a shuffling, sweaty, pack-weighted American in the middle of the typically sheep-and-moss-only landscape. They paused, staring at me with utter confusion and defiance.

“Yeah, I don’t know what the fuck I’m doing out here, either,” I remember thinking. As I originally worried, the path I’d chosen to follow wasn’t well established in the first 32 miles. In fact, it wasn’t established at all.

By the time I’d encountered this gathering of sheep, I’d run an additional 12+ miles of deeply mossy back tracking and rock scrambling trying to find a trail that appeared only in the fictitious world of my poor excuse for a map. As a result, I’d basically created a route of my own, first across open volcanic rock fields, then on trails through and over Hengill to where I was currently shuffling along, on a descent towards a building that was apparently an “adventure hotel”.

“ ‘Adventure hotel’?!” I thought, “my PEOPLE!” I guess I was expecting something akin to a hostel. But when I walked into the experience of the lobby, my body dirt covered with an earthy aroma of post ultra-mountain-running freshness, the stares from the front desk staff and passing robe-cladden spa attendees quickly dispelled my previous assumptions. “Adventure” was apparently referring to a more orchestrated experience. A kind of zoo-tourism – a means of paying to experience the exotic grandness of mountains from a comfortable distance. With Optional mojitos and $30 hamburgers.

After unsuccessfully trying to hitch a ride to get back on track for reaching my needed end point that day, I decided grabbing a taxi from the hotel to the next trailhead was my best option. See, one doesn’t just get places in Iceland – it isn’t densely populated, there’s a decent amount of mileage between towns, and resources I’d normally seek out, like buses or hitching, were proving inaccessible that day. It was hard enough getting from the airport to Porlakshofn (trust me, you’re pronouncing it wrong), the fishing town I’d launched from in the south. Getting to a random drop-off in the middle of nowhere north of Pingvellir? What’s Icelandic for “when hell freezes over”?

I felt my stomach drop as I approached the front desk staff. If I couldn’t find a way to skip the next road section, I wouldn’t make the mileage necessary for my flight-time cut-off.

“…Hello? Can I help you?” the 20-something receptionist asked me, her confusion resembling the oodles of sheep I’d scouted throughout the day.

“Hi there. I’ve just… I’ve come a long way. I was wondering if you could help me get a taxi to just north of Pingvellir?”

“Where did you come from?” She asked.

“From… I’m sorry, I can’t pronounce it properly. Porlakshofn? Tsor-lak-shaw-fun? Lak-gagun?” As I gargled the vowels of the Icelandic town whose name I was butchering, I felt a rush of disappointment.

Of the 60 miles I was supposed to run that day, I’d run 44, and only a bit over 20 of them were on my originally planned route. How the hell was I going to get to the northern coast in time? Was it even possible anymore? How could I have let myself down so severely? I’ve almost never failed to achieve an ultra running goal I’ve set for myself, and now here I was, failing while my friends and family anticipated news from my journey…

“Yes, I left this morning. I just came over Hengill, and I’m trying to get to – forgive my pronunciation – Blonduos? Blond-oo-ohs? Over the next few days,” I responded, dejectedly. “It’s only been somewhere around 60 kilometers, and I was supposed to go… how many kilometers is 60 miles?””

“Wow. That’s just… amazing,” she responded with a smile. I knew that look – I’ve had it myself. it was awe, and it was the last thing I expected.

Her response was a reality check. I’d run god knows how many feet of elevation, well over 60 kilometers, navigated my way through a pathless foreign landscape in differing degrees of “raining”, and somehow I was telling  myself I was a failure. If this was failing, I realized, was it even possible for me to see myself as a success? Is this why it had taken 2 marathons, multiple trail ultras, myriad solo 50k+ runs, and bike-packing the Colorado Trail before I began to believe people when they referred to me as “strong”?

As I digested my existential crisis and a $30 burger, I found myself at a turning point. While waiting on a response from the taxi company, I called my airline to try to push my flight back by a day or two. They said it could be done… for $1000. Well, if I missed the bus on my expected northern arrival day – the only ride that would take me to the airport, a bus that departed at only one time I could catch to get to my flight in time – I’d be hit with a grand of expenses I literally couldn’t pay.

And then word arrived from the taxi: They refused to come for me. They could make more money staying in Reykjavik, they said, than they could shuttling some crazy person to the middle of nowhere. And even if they had considered coming, they said, it would cost me around $200 for the ride.

This was it. All unpronounceable signs were pointing to an ending.

“Well,” I thought, “I guess I can just relax and explore Reykjavik, then.”

I came here to get into nature, to get into myself, to let go, to experience everything only an adventure like this could well up within me. I was getting to the northern coast. I would NOT give up on this journey. I would not give up on myself.

Either I will find a way or I will make one. The time had come to plow yet another path entirely my own, and no one could make it happen but me.

I finished my meal, gathered my things, and got to planning.