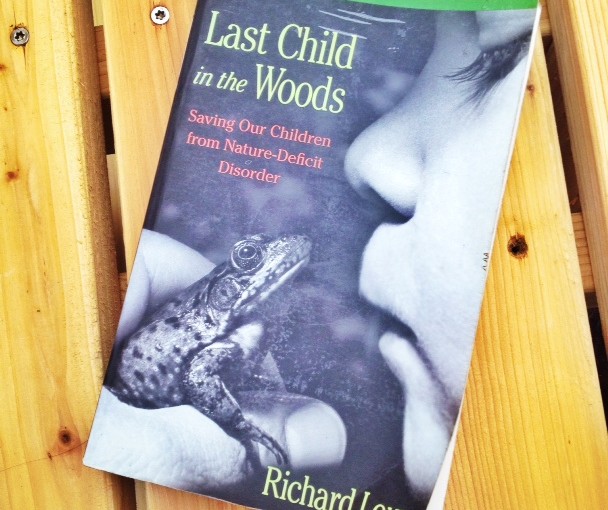 BOOK OF THE MONTH

Hey Ladies & Lady-Lovers! I’ve been doing quite a bit of technical reading as of late due to thesis research requirements, but I’m finding time to check out fascinating and engaging reads as my weight-luxury on the trails (along with tea/coffee).

And so, as my giddiness for particular books increases, I thought I’d pass along a book I’m loving each month.

As we head towards September, I’ll pass along a well-written, well researched, interestingness-loaded non-fiction read: Last Child in the Woods – Saving Our Children from Nature-Deficit Disorder.

Having kids? Already have kids? Don’t want kids, but want confirmation that your backyard-fort-building and tech-lite childhood was better than modern iphone-facebook-zombie childhood? Just want to learn some cool stuff about the effects of being in nature? Then read this book!

Louv compiles research and accessible theory to explain why exposure to nature is integral to our mental and physical health, particularly for kids. He reviews ADHD, our overuse of medication, and how nature can serve as an effective cure for our frazzled selves. A little from the book:

“Our brains are set up for an agrarian, nature-oriented existence that came into focus five thousand years ago… neurologically, human beings haven’t caught up with today’s overstimulating environment… we know this anecdotally, though we can’t prove it yet.”

New studies may offer that proof… In 1890, James described two kinds of attention: directed attention and fascination (i.e., involuntary attention). In the early 1970’s, the Kaplans began a nine-year study for the U.S. Forest Service. They followed participants in an Outward Bound-like wilderness program, which took people into the wilds for two weeks. During these treks and afterward, subjects reported experiencing a sense of peace and an ability to think more clearly; they also reported that just being in nature was more restorative than the physically challenging activities… for which such programs are mainly known. The positive effect of what the Kaplans came to call “the restorative environment” was vastly greater than [researchers] expected it to be.

…“If you can find an environment where the attention is automatic, you allow directed attention to rest. And that means an environment that’s strong on fascination.” The fascination factor associated with nature is restorative, and it helps relieve people from directed-attention fatigue.

Enjoy the reads, buy from a local bookstore, and keep on pedaling, Ladies!